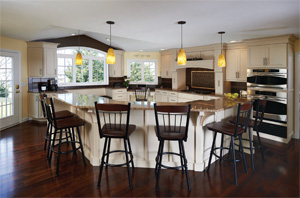 This kitchen addition like many others, started with a desire to improve the ability to gather and entertain within the kitchen itself. When indoors, most people in this day and age spend the majority of their time with family and friends, in their kitchens. While this is a natural culmination of our busy lives, the need to take advantage of every opportunity to spend time together as families, and our love for food, drink and friends, for many homeowners the kitchen isn’t always the ideal space to enjoy these moments. That is unless the kitchen is designed with just these things in mind. Even in homes built within the last few decades, the kitchen has been generally undersized in relation to other rooms in the house that are used far less. From a design point of view, the kitchen has been mostly relegated to a utilitarian space meant for preparing and storing food, not gathering and entertaining with even average sized groups of people. Some of these design conventions in homes are dictated by economics and the extra cost that adding square footage to a kitchen imposes on the overall cost of the home. After all, kitchen space isn’t an empty shell comprised mainly of flooring and paint. Every square foot of kitchen space carries costs far above any other room in the home. Cabinets, appliances, countertops, additional lighting, all carry costs greater than the average footage. In addition, consumer perception of what rooms a house should include in order to be considered a quality home, force architects to manage the overall square footage to accommodate these conventions. Unfortunately, in most cases that means sacrificing “living” space within the kitchen itself. Even though for a lot of people, that’s the room they find themselves “living” in the most.

As a result of lack of space, kitchen remodeling, expansions and additions in particular, are becoming necessary improvements for aligning lifestyle with the flexibility the kitchen can offer a large family. This potential for increasing quality of life determine what would fit the budget and still accomplish all of their goals. In some cases this is as simple as erecting a rectangular extension off the back of the home to increase the square footage of the kitchen. However in this case, because of the presence of mainly right angles and boxes as the primary lines of the existing rear façade, the homeowners and I decided to create some interest and variation to the simplicity of the existing back elevation by incorporating 45 degree angles to the corners of the addition. This basic design technique helped in many ways to define the interior layout, and create the zones that allowed the new kitchen to act as a living space. From the outside, it softened the potentially abrupt appearance of yet another box, jutting out from the back of the house.