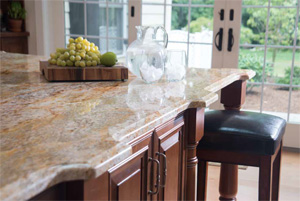 Like many mid-century kitchens, this one was small and not very functional. Working with David White of Kitchen Encounters, the homeowners were able to create an open, multifunctional design that melds with the other living areas, as well as the outdoors.

the family of four purchased their mid-century house three years ago. The neighborhood features classic homes on wooded lots that are a stone’s throw from the Conestoga River. The new owners immediately formulated a “to-do” list. The kitchen, which needed some serious work, topped the list. “It was an odd setup for a house of this size,” David says, recalling the first time he saw the small kitchen that was separated from the rest of the house by a laundry room. “The laundry room dominated a large portion of the kitchen space,” he says. It was also obvious the kitchen had been remodeled. “The Euro-look, ‘80s-style,” he says of the maple cabinetry. “Like most pre- ‘90s kitchens, this one was not conducive for entertaining,” David observes. It was essentially dedicated to cooking … in isolation. “Today’s kitchens are geared more to cooking and mingling,” David reports, noting that the mingling element could entail anything from a family catching up on their day over dinner served atop the island to friends gathering around it for an impromptu party. By the time David met with the homeowners in the summer of 2012, they had devoted considerable thought to the project. Their wish list consisted of opening up the kitchen and connecting it to the other living areas; updating its look; making it more multifunctional; introducing more light and relocating the laundry. Ultimately, David’s design accomplished all of that… and more.