Kitchen Expansion – A Case Study from Start to Finish

The project started with an in home consultation which revealed a need for massive improvement in the areas of square footage, food storage, quantity of appliances, preparation/ cooking areas, and overall design. The homeowner’s (Sue & Walt) are a family of six and the previous kitchen was lacking in almost every way. They were aware of the need for more square footage, so together we determined how much of the back deck that we could use for kitchen space while still maintaining the functionality of the deck and the appearance of the rear façade. While formulating a plan for the addition, we quickly realized that the deck framing that would soon become the floor of the kitchen addition would need to be well insulated so that plumbing could be run to the new sink location. Since the deck was above a daylight basement area, it would need to be protected from the weather. 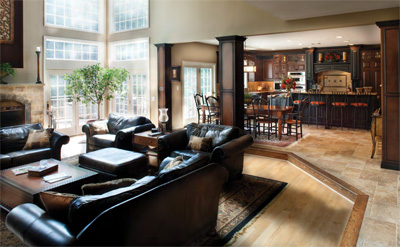 While considering the options for accomplishing this, Sue wondered if it would be possible to add a bathroom/changing room under the kitchen addition to accommodate people using the pool. As it was, anyone using the pool had to climb a flight of stairs and trek through the house to change clothes and use the bathroom. This lower level addition would accomplish insulating and finishing off the underside of the deck, as well as provide a much needed bathroom space for the numerous people who used the pool on a regular basis. Since the space below the existing deck was largely unused, it was clear that this too should be incorporated into the overall design of the addition. The lower bath would require a concrete footer and slab that would later be stained and sealed to create an interesting design element that coordinated with a dramatic concrete vessel sink bowl that Sue had selected from our showroom. With these two elements sharing similar textures, I suggested continuing this surface in the shower surround to pull it all together. A linen closet was added in the space for two purposes. The first was to enclose the injector pump that was necessary to pump all of the waste water from the bath, up to the main drain line on the first floor. Secondly was to create storage for towels, toiletries, cleaning products, etc.

The next space consideration was the laundry area that adjoined the kitchen and is the main entry from the garage. We came up with a couple of ways to open up the narrow space between the laundry and kitchen and in doing so, made room for French doors to separate the two spaces, instead of the single opening that was there previously. We also removed a portion of a dining room wall to further increase the traffic area and make the dining room more easily accessible. The greatest improvement came as a result of a conversation in which Sue was expressing her dislike of the narrow hall like feel of the laundry room. Fortunately for her, there was a staircase behind the laundry room wall leading from the garage down into the basement. Since the increased space in the laundry was much more valuable than the secondary staircase, it seemed appropriate to trade one for the other. The remaining part of the staircase in the basement was used as a closet, with stairs acting as shelves. This created a much more spacious laundry room that gave them more storage, areas to fold and sort clothing as well as an increased traffic area from the garage. Closets also occupied a large part of the original space, so more efficient lockers where designed to designate specific areas for the kids to store coats, shoes, backpacks, and sports equipment, in a more aesthetically pleasing way. It also provides a place for the kids to sit and remove their shoes before entering the rest of the house.