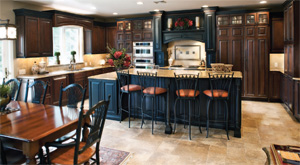 In the booming days of real estate, when homes sold in a matter of weeks, Sue and Walt Ali looked at a house that had been on the market for months. In their opinion, that most important of rooms – the kitchen – was probably the deal breaker.

Sue saw multiple problems with the kitchen. First, it was small. Second, it seemed to be cut off from the rest of the first floor (the house was built when the great-room concept was just taking root). Third, she hated the aesthetics. “It was pink,” she says, referring to the color impression the pickled-oak cabinetry presented (the Euro styling that was popular in the early ‘90s was already looking dated). And, the adjacent laundry had its own issues (it was small and dark).

Nevertheless, the family of six needed space to grow and the large house would definitely provide the room that was needed. They also loved the secluded location that was just minutes from shopping and downtown. With more pluses than minuses on the tally sheet, they bought the house with the idea that they’d remodel the kitchen and improve upon the laundry room. 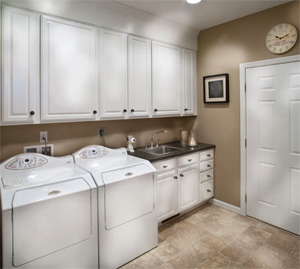 As we all know, life often gets in the way of even the best-laid plans. Time flew by and before they knew it, six years had passed and the kitchen and laundry remained unchanged. “I lived with that kitchen for six years,” Sue remarks. “I hated to cook. We never entertained. Thank goodness the kids were small or we all wouldn’t have fit in there.”